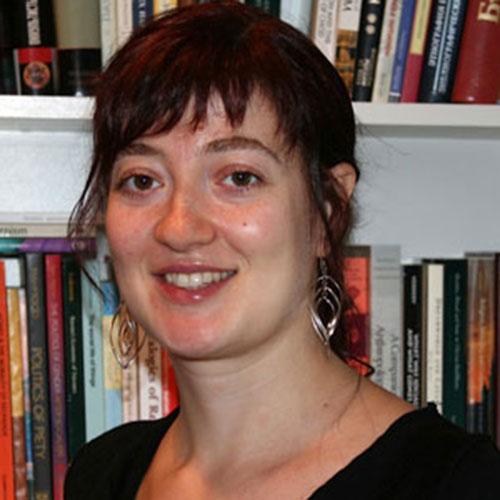 Professor of Anthropology and Social Sciences

Anya Bernstein’s first book, Religious Bodies Politic: Rituals of Sovereignty in Buryat Buddhism (University of Chicago Press 2013), explored the transformation of Buddhist practice among a Siberian indigenous people known as Buryats, foremost through their post-Soviet renewal of transnational ties with their fellow co-religionists across north and south Asia. To capture these issues ethnographically, Bernstein conducted multi-sited field research in Buryat communities in Siberia as well as in Tibetan monasteries in India where some Buryat monks currently receive their religious education. The book focused on the ways in which religion and politics have intersected under conditions of rapid social change in terms raised by recent work on sovereignty and postsocialism.

Religious Bodies Politic was winner of the Award for Excellence in the Study of Religion from the American Academy of Religion in 2014; and an Honorable Mention for the Davis Center Book Prize in Political and Social Studies from ASEEES, the Association for Slavic, East European, and Eurasian Studies, the same year.

Her second book, The Future of Immortality: Remaking Life and Death in Contemporary Russia (Princeton University Press 2019), explores how, from the mid-nineteenth century onward in Russia, the Soviet Union, and now the Russian Federation, an uncommonly wide range of actors has pursued the dream of achieving human immortality. Beginning with a long line of Russian philosophers, to the experiments of Soviet-era scientists, and with global implications felt today in Silicon Valley and beyond, the conjunctions of body, mind, and being have been in steady motion, pressing at the very limits of death itself. In a rich ethnography that traverses contemporary Russian culture and politics, Bernstein documents these remarkable technoscientific and religious futurisms. She traces the complex roots of this phenomenon in particular histories of visionary social and biological engineering, space exploration, Soviet philosophies of time, and shifting narratives of the human condition produced by scientific and technological advances in the twentieth century and today. From the titans of Russian tech firms to the owners of a smaller-scale cryonics outfit and their clients, alongside Russian Orthodox followers of the charismatic thinker Nikolai Fedorov, academic scientists in the field of biogerontology, and grassroots neurotechnology enthusiasts, Bernstein carefully explores what is at stake in such pursuits. What do they portend for the very idea of the human?

Bernstein also published widely on the issues of religion, secularism, art and censorship in contemporary Russia, particularly on the moral dilemmas that have animated passions behind recent post-Soviet culture wars, such as the conflicts between contemporary artists, the Russian Orthodox Church, and society at large. She also published on the battles over religious relics, issues of end-of-life care, and politics of shamanic tourism in Russia.

In 2018, Bernstein started field research for a new book project, which extends her work on technoscience and futurism in Russia to issues relating to human-environment and human-animal interactions and climate change. Tentatively titled Pleistocene Park: Extinction and Eternity in the Russian Arctic, the project chronicles the efforts of a transnational team of scientists to “resurrect” an extinct ecosystem in Arctic Siberia in an effort to slow down the melting of permafrost.

As a visual anthropologist, Bernstein has directed, filmed, and produced several award-winning documentary films on Buryat Buddhism and shamanism, including Join Me in Shambhala (2002) and In Pursuit of the Siberian Shaman (2006).