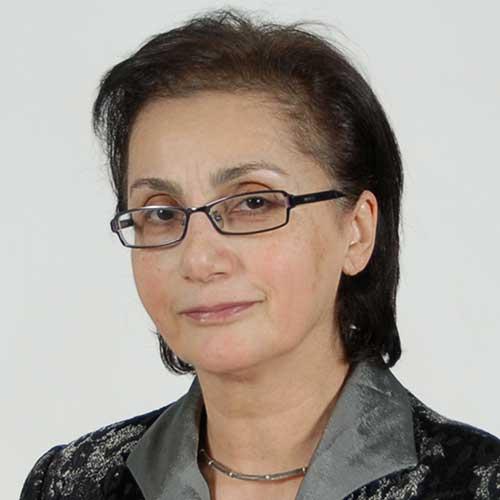 Field
Political Science/Government
International Relations
Religion
Time Period
20th century
21st century
Location
Armenia
Azerbaijan
Eastern Europe
Georgia
Russian Federation
Ukraine
Caucasus
Commonwealth of Independent States
Former Soviet Union
Founder and Director (since 2001) of the Center for Strategic Analysis, (Spectrum) in Yerevan, Gayane Novikova was a Visiting Fellow in the Near Eastern Languages and Civilization Department, Harvard University, 2009-2012, and a 2008-09 Fulbright Research Scholar at the Davis Center. She conducted research 1994-2000 at the Armenian Center for National and International Studies and 1978-2000 at the Institute of Oriental Studies of the National Academy of Science of the Republic of Armenia. In 2011 and 2013, Dr. Novikova taught a course (“Russian Foreign Policy and International Relations in Eurasia: Security and Politics in the Caucasus”) in Boston University’s International Relations Department. She received her Ph.D. in Modern History in 1987. Her areas of expertise include international relations, Russia’s foreign policy, conflicts in the South Caucasus, and unconventional threats. Dr. Novikova is the author of six monographs and more than 70 articles, and the major editor of 13 anthologies. Among the recent publications are the book "The Conflict Potential of the South Caucasus: The Geopolitical Dimension" (2011, Center for Strategic Analysis, Yerevan), and the articles "The South Caucasus and the European Security Strategy," (In: Building Confidence in the South Caucasus: Strengthening the EU’s and NATO’s Soft Security Initiatives, Vienna, July 2013),"The Shifts in Security: The South Caucasus at the crossroad" (In: Regional Security Dynamics in the South Caucasus, NISS, Yerevan, 2013), and others. She is, since 2004, President of the George C. Marshall Center Alumni Association of Armenia.